Hill set to bow out 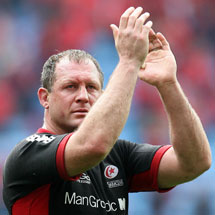 Gaffney said: “Richard is a player I have long admired from a distance, and I consider it a privilege that I have been able to work with such a great over the past two seasons.

“I can’t speak highly enough of him as a player and a person, and he deserves all the plaudits he receives after what has been a fantastic career for Saracens, England and the Lions.

“As a group, we want to make sure we end on a high note for him and put in a performance that we can all be proud of to give him the send-off he deserves.”

Saracens have reached four semi-finals under Gaffney’s direction, and he added: “I would like to think that is not a bad return.

“We have come a long way in that time, but there is still a lot of work to do in terms of our consistency.

“I’ve really enjoyed my spell at the club and a pleasing aspect is that we have developed our own style of play and it’s something the players enjoy.”