Former British Lions flanker Richard Hill headed into retirement with a victory on his 288th and final appearance for Saracens. [more] 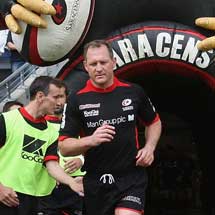 Former British Lions flanker Richard Hill headed into retirement with a victory on his 288th and final appearance for Saracens.

But it took a last-minute try from left-wing Kameli Ratuvou to secure victory over Bristol by 25-20 on the final day of the regular season in the Guinness Premiership.

Flanker Hill – a key player in England’s 2003 triumphant World Cup campaign in Australia – received a tremendous ovation from the fans.

But it looked as though the 34-year-old’s farewell was going to be ruined by Bristol’s powerful 19-year-old centre Luke Eves, who struck with two tries as the visitors led 20-18 going into the final minute.

But Ratuvou outstripped the visiting defence to race over in the left-hand corner for the last-gasp winning try.

Fly-half Alex Goode, making his debut, converted with the final kick of the match to complete a 10-point contribution, with two penalties and two conversions.

The other Saracens tries came from full-back Richard Haughton and right-wing Noah Cato, Goode’s England Under-20 team-mate, who marked his second start with his second try for the club after scoring on his debut against Leeds in September.

Bristol replied with the two tries from Eves and 10 points from the boot of fly-half Ed Barnes, who demonstrated his determination not to surrender his place to new signing Adrian Jarvis, who will join the west country club from Harlequins in the summer.

Saracens built up a 15-3 lead in the opening 17 minutes but Bristol dug in and fought back to give their opponents a close run in their first match at Milton Keynes after Watford’s involvement in the Coca-Cola Championship play-offs caused the game to be switched from Vicarage Road.

But Saracens finally turned the tables to make sure it was also a winning goodbye to Hill’s back-row colleague Paul Gustard, who is also retiring, and director of rugby Alan Gaffney, who will be replaced by former Australia coach Eddie Jones next season, although he will stay involved in a consultancy role.

After Goode kicked Saracens into a first-minute lead with his opening penalty, Haughton underlined his growing claims for a place on England’s summer tour to New Zealand with a brilliant solo try 10 minutes later.

Showing a stunning turn of pace, he accelerated through the Bristol defence to touch down near the post.
Haughton was also involved in Saracens’ second try in the 17th minute.

The hosts capitalised on a drive by scrum-half Neil de Kock to move the ball wide, where Haughton provided the final pass for Cato to dive over in the right-hand corner.

But Bristol refused to lie down and struck back in the 24th minute when winger David Lemi rounded De Kock and Cato in a run down the left touchline before passing inside to send Eves in.

With Barnes adding the conversion and two second half penalties, Bristol reduced the arrears to two points by the interval.

They went ahead for the first time in the 52nd minute when Barnes broke through the defence to send Eves bursting through for his second try.

Goode cut the Bristol lead to two points with his second penalty in the 68th minute but Saracens had to wait until their final attack for Ratuvou’s try, which secured victory and sent England and Lions legend Hill off on his victorious final lap of honour.