Australia full-back Chris Latham has conceded his international career is over following a shoulder injury. [more] 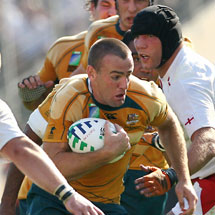 Australia full-back Chris Latham has conceded his international career is over following a shoulder injury.

The 32-year-old tore the pectoral muscle from the bone in his right shoulder during the Reds’ 27-21 defeat against the Crusaders in Brisbane on Saturday.

Latham faces surgery to repair the injury and is set to be sidelined for four months, effectively ruling him out of the upcoming internationals against Ireland and France as well as the Tri-Nations series.

And with the veteran leaving the Reds to begin a three-year contract with Worcester from next season he believes his international career is dead and buried.

“To be honest, I’d like to (be considered for selection) but I don’t see why they’d bother,” Latham told the Reds’ official website www.qru.com.au.

“I could probably make it back for one Test (but) there’s no use for that.

“They (Wallaby selectors) need to move on and obviously there’ll be people playing in between now and then and I really hope they get good form and they stay there and start performing. If that’s the case there’s not much use wheeling me out again.”

The injury leaves Latham stranded on 99 Super 14 caps with the Reds and denies him a swansong appearance with the Queensland club against cross-border rivals the Waratahs, where he began his career, next weekend.

But despite leaving the Reds on a low, Latham believes he has led a “privileged life” earning 78 Test caps for Australia since his debut in 1998.

He said: “I can’t be filthy at anything. I’ve played over 100 games for Queensland, 70-odd Tests for Australia. It’s a pretty privileged life.

“I don’t at all feel ripped off. A little bit disappointed that it had to end this way. I would have cherished running out on Saturday night but it’s not meant to be, so, move on.”