New Zealand fly-half Daniel Carter's return is one of seven changes Crusaders coach Robbie Deans has made to his starting XV for Saturday Super 14 match against the Highlanders. [more] 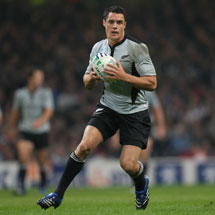 New Zealand fly-half Daniel Carter’s return is one of seven changes Crusaders coach Robbie Deans has made to his starting XV for Saturday Super 14 match against the Highlanders.

Carter began last weekend’s match against the Queensland Reds on the bench but produced an influential 25 minute spell at Suncorp Stadium to prove he has recovered from an ankle injury suffered at the end of March.

Also returning to the starting line-up, for what is in effect a dead rubber match, are scrum-half Andrew Ellis, lock Ali Williams, prop Ben Franks and hooker Corey Flynn, who all began last weekend’s match on the bench.

Veteran loose forward Reuben Thorne has also recovered from a broken knuckle and takes over from blindside flanker Kieran Read, while Caleb Ralph is preferred to Casey Laulala at centre.

Saturday’s game will be Thorne’s 127th for the Crusaders, tying the record of Highlanders’ Anton Oliver for the most appearances by any player for a single New Zealand Super rugby franchise.

The Crusaders have already earned the right to host one of next week’s semi-finals after securing top spot, while the Highlanders, 12th going into the game, were out of the running long before this weekend’s game.

“The Highlanders have always been a particularly difficult opponent for us,” Deans told the Crusaders website www.crusaders.co.nz.

“There’s a lot of history obviously, between the two South Island regions, and the derby element has always added a bit of heat to the contest. Saturday night will be no different.”