McGeechan is our Sir Alex – Irvine

Ian McGeechan was hailed as rugby's own Sir Alex Ferguson after being appointed Lions head coach for next year's tour to South Africa. [more] 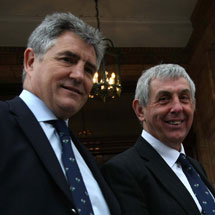 Ian McGeechan was hailed as rugby’s own Sir Alex Ferguson after being appointed Lions head coach for next year’s tour to South Africa.

McGeechan has become synonymous with the Lions over a 34-year association which stretches back to the unbeaten 1974 trip to South Africa, when he started all four Tests as a centre.

The Wasps director of rugby, a “unanimous choice” by the Lions board, will take charge for the fourth time having already overseen series victories over Australia in 1989 and the Springboks in 1997.

Now 61, McGeechan has been a leading coach in the world game for two decades, earning success at both club and international level and still going strong.

And Lions chairman Andy Irvine said: “If you look at Geech’s record it really speaks for itself. He is proven to be successful over a long period of time.

“We approached him and the big question was: ’Is the hunger still there?’

“He is as fired up as he has ever been and there are similarities in that between Geech and Sir Alex Ferguson.

“The desire and the hunger is there. He is 61-years-old but he is a very young 61. He is fit as a flea, he just loves the Lions to bits and he is already extremely excited at some of the young talent coming through.

“He has been coaching at the top for 20 years but he is as enthusiastic now as I have ever seen him.”

McGeechan vowed to restore the unique spirit and ethos of the Lions, something critics claim was lost on Sir Clive Woodward’s ill-fated tour to New Zealand in 2005.

But it is an approach McGeechan, Lions chairman Andy Irvine and team manager Gerald Davies all disagree with and the 2009 touring party is to be cut by “10-15%”.

McGeechan plans to take just one coaching unit – four or five specialists – and around 35 players, who will be expected to share rooms.

“When I spoke to the Lions committee they asked me what my principles are and how I see a tour running,” said McGeechan.

“I have a very strong philosophy and some of the traditions are so important to making sure the Lions have a fighting chance of succeeding.

“I firmly believe you need a very tight group. We will have one coaching team and one group of players.

“All preparations for the 2009 tour will be about one group working very closely together. The fact it’s against the world champions also makes it a massive challenge.”