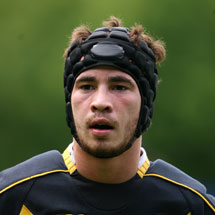 British and Irish Lions hopeful Cipriani was tackled by Ollie Barkley and found himself at the bottom of a ruck in the 49th minute with Wasps leading the Guinness Premiership semi-final 14-7.

The 20-year-old fly-half received oxygen treatment on the pitch, before being carried off on a stretcher and taken to London’s Lister Hospital, where he is undergoing tests.

Wasps director of rugby Ian McGeechan said: "We don’t know anything yet about Danny.

"We’ll have to see if it’s a break, dislocation or both. We think it’s the ankle.

"The only priority for Danny now is to be 100 per cent fit again. He’s a talented player and his fitness should be all we’re thinking about.

"We’ll make sure that happens. When he comes back and plays he’ll be 100 per cent. This club does that for its players."

Television cameras opted not to replay the incident which was witnessed by England manager Martin Johnson in the stands, but photos later indicated the extent of the damage.

Cipriani was set to start at fly-half against the All Blacks in June after starring in England’s RBS 6 Nations finale against Ireland.

He had ousted World Cup hero Jonny Wilkinson as England’s first choice fly-half but now faces a long spell of rehabilitation as battles against a potentially career-threatening injury.

"Danny has a huge future so hopefully it’s not too serious and he’ll back soon.

"But he’ll return a better and stronger player because of what’s happened today so there’s no reason to worry too much about him."

Cipriani was joined in the ambulance by team-mate Tom Voyce after the England winger dislocated his shoulder.

McGeechan said: "Tom’s shoulder is still out. We have it three goes to get it back but couldn’t manage it. He’s in a lot of pain."