Leicester boss Marcelo Loffreda completed mission improbable after Tigers' stunning 26-25 victory over Gloucester, and then warned Wasps: "We are not going to give up." [more] 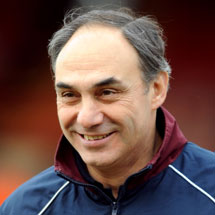 Leicester boss Marcelo Loffreda completed mission improbable after Tigers’ stunning 26-25 victory over Gloucester, and then warned Wasps: "We are not going to give up."

But despite finishing fourth after the 22-game regular season, they reached their fourth successive Premiership final by securing a first away win for any club in six seasons of play-offs.

Loffreda said: “The squad and the staff have been very supportive, also the board.

“It was important so I could work more relaxed, but we are still in the race and that is all that matters.

“I have said a few times before that we are not going to give up.”

Gloucester, despite topping the regular Premiership season for a third time in six seasons, once again blew it.

While Leicester can now look forward to meeting Wasps, Gloucester must reflect on another campaign that saw them fall painfully short.

Fly-half Ryan Lamb kicked 17 points, while Tigers lost the plot to such an extent that they were reduced to 13 men in the first-half after number eight Jordan Crane and scrum-half Harry Ellis were sin-binned in quick succession.

Ryan said: “We committed suicide in the second half. We could, and should, quite easily have won.

“I’ve lost a bit of enthusiasm myself. For a side to move forward, you cannot continue to be a side being told what to do.”