Newcastle have confirmed Steve Bates' appointment as their permanent director of rugby. [more] 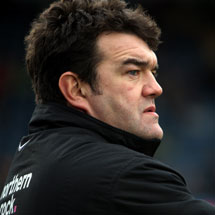 Newcastle have confirmed Steve Bates’ appointment as their permanent director of rugby.

Bates, who has signed a three-year contract, took the post on an acting basis following John Fletcher’s departure from Kingston Park in March.

Although Newcastle finished 11th in the Guinness Premiership, they reached the European Challenge Cup semi-finals and recorded a notable late-season win by beating Premiership finalists Leicester.

Former England scrum-half Bates is currently in his second spell with the Falcons.

He was part of Rob Andrew’s coaching team when Newcastle won the Premiership title in 1998 and lifted the Tetley’s Bitter Cup three years later.

Bates also spent three years with now-defunct Scottish side Border Reives, achieving Heineken Cup qualification during his time with them, and he will coach the England Saxons in next month’s Barclays Churchill Cup competition.

Fletcher left during this season’s RBS 6 Nations, a parting of the ways that did not go down well with some of Newcastle’s senior contingent, notably England centre Toby Flood.

Flood and his England colleague Mathew Tait will head for pastures new this summer, with Tait joining Sale Sharks and Flood set for a move to Leicester.

Bates, meanwhile, will now concentrate on finalising his coaching staff as Newcastle look to bounce back from a poor Premiership campaign next term.