Ireland coach Michael Bradley has welcomed Tuesday's fixture against the Barbarians as the perfect tune-up before heading Down Under. [more] 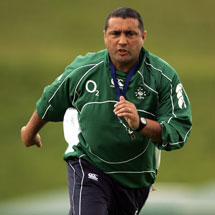 Ireland coach Michael Bradley has welcomed Tuesday’s fixture against the Barbarians as the perfect tune-up before heading Down Under.

The Irish depart for New Zealand on Saturday and face a Test against the All Blacks on June 7 before locking horns with Australia a week later.

A star-studded Barbarians team will provide the only opportunity for Bradley to experiment and Ireland’s interim coach sees the Kingsholm showdown as a valuable exercise.

He said: “The Barbarians game will be important for the players to get up to that pace of play before we arrive in New Zealand.

“It will also be helpful for the Churchill Cup players in the match squad ahead of their tour.

“Overall, the array of talent that the Barbarians will have on show is of the highest calibre, so it will be good test for us.

“But I think we can get an awful lot out of the game ahead of the tour.”

Munster are not represented in the 22 to face the Barbarians because of their involvement in Saturday’s European Cup final against Toulouse.

Leinster skipper Brian O’Driscoll leads the side and forms a new-look midfield alongside Luke Fitzgerald.

Bradley said: “One of the main talking points of selection will be the new centre partnership as there has been plenty of discussion about where Luke’s best position is.

“This was the ideal opportunity to try Luke in midfield in a pressure situation against quality opposition and both he and Brian have enough talent to make it work.”

London Irish captain Bob Casey has seen his eight-year international exile end with his inclusion in the second row alongside Malcolm O’Kelly.