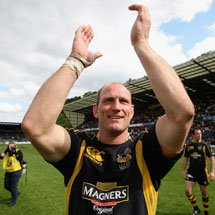 Dallaglio will play his last match in the Premiership final against Leicester a week on Saturday, a fitting conclusion to an epic 18-year career.

The Wasps skipper is relishing retirement knowing the likes of former France blindside Betsen and All Black scrum-half Robinson are world class signings who will help preserve his legacy.

He said: “I don’t wish I was playing next season – not when we sign players like this.

“At the moment I’m still part of a Wasps team who will continue to win long after I have gone. Signings like these give us a great opportunity to continue winning.

“We consider very carefully the ones who come in and we are delighted to have Mark and Serge.”

Wasps coach Shaun Edwards is confident the duo, who will arrive at Adams Park over the summer, are quality operators who demand respect.

“In Serge you have one of the premier defensive players in the whole world.

“And in Mark Robinson you have one of the most competitive and toughest half-backs in the world.

“They both have respect from every single player they play against.”

Dallaglio insists Wasps’ success – they have won three Premiership titles and two European Cups since 2003 – has been built on the hard work of talented personnel on and off the pitch.

He said: “We’ve had a lot of stability at the club and consistency in terms of players and management.

“People who have spent time at Wasps are shaping the game elsewhere. Rob Andrew is the RFU’s director of elite rugby.

“Shaun Edwards is coaching Wales, Ian McGeechan is coaching the Lions. John Mitchell is in charge of Western Force.

“Dean Ryan is director of rugby at Gloucester, Steve Bates at Newcastle. The list goes on and on.

“These guys have had an influence at the club and have taken their input elsewhere.

“There’s nothing flash about the people involved at Wasps, they just have a great pedigree.”