Lyons out of Super 14 final

Inspirational Australia backrower David Lyons has been ruled out of the Waratahs side for Saturday's Super 14 final against the Crusaders. [more] 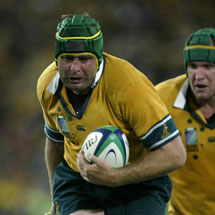 Inspirational Australia backrower David Lyons has been ruled out of the Waratahs side for Saturday’s Super 14 final against the Crusaders.

Lyons sustained a hamstring injury last week but was given every chance to prove his fitness prior to the match in Christchurch.

However, the 27-year-old lost his race against time and will be forced to watch the game from the sidelines.

Waratahs coach Ewen McKenzie said the loss of Lyons was a huge blow for the club but he remains confident in his team.

"The temptation for many players to play would have been huge, but David’s always been about the team and although this is extremely disappointing for him he didn’t want to play if he wasn’t 100%," McKenzie said.

"Even though David won’t be on the park on Saturday, his input and tactical nous will be important for the squad in the final lead-up to the match."

Flanker Pat McCutcheon has travelled to New Zealand and will join the squad as a replacement for Lyons but is unlikely to feature in the match.

Hooker Tatafu Polota-Nau has been promoted to the starting line-up with Adam Freier is relegated to the bench.

McKenzie believes his team has the perfect mix of experience and youth.

"It’s an exciting blend and we won’t die wondering on Saturday," he added.

"The senior guys have been around this squad for anything between five and 10 years. Phil (Waugh), Matt (Dunning) and David Lyons all started with NSW in around 1999-2000. Adam Freier and Lote have been here since ’03, (Dan) Vickerman since ’04.

"On the flip side of that we fielded eight players this year who had never played Super Rugby for the Waratahs.

“We’ve got a brand new centre combination, our number 13 is 18-years-old and people forget Kurtley (Beale) and Lachie (Turner) are only 19 and 21."