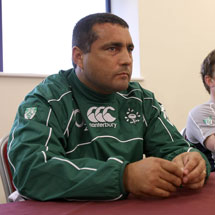 O’Driscoll is due to arrive within the next 48 hours after leaving the Ireland camp prior to their win against the Barbarians earlier in the week because of the death of a close friend.

Reddan, of Wasps, and Leicester’s Murphy were involved in the Guinness Premiership final, won by the London club yesterday, and stand-in coach Michael Bradley is hoping to have them in training by Thursday at the latest.

Despite there being less than a week until the Test against New Zealand, Bradley felt the players’ late arrival would not be too disruptive for the squad.

"Brian was with us up until the Barbarians match, so he’s obviously very familiar with what’s happening," Bradley said.

"Geordan and Eoin were with us for the Six Nations so systems are in place. They are smart rugby players and they’ll do their homework for a match on Saturday. It’s not really an issue for us."

Next weekend’s match will not be played under the experimental law variations (ELVs) which have been in use during the southern hemisphere’s Super 14 competition.

But Bradley was unsure how much of an advantage that would be for Ireland.

"On the other side, having looked at Super 14 matches, the amount of time the ball is in possession and the speed at which the game is played is now considerably faster than what it is played without them (the ELVs).

"So we are going to have a meeting of the two (different styles) and it will be the first game played under those conditions, so we will see how it goes."