Robbie Deans has named seven uncapped players in his first Australia squad for the Test against Ireland on June 14. [more] 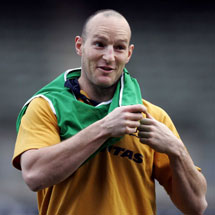 Robbie Deans has named seven uncapped players in his first Australia squad for the Test against Ireland on June 14.

The new Wallabies coach, who arrived in Sydney this morning after leading the Crusaders to the Super 14 title with victory over the Waratahs, has called up Luke Burgess, Dean Mumm and Lachie Turner along with Western Force duo Ryan Cross and Richard Brown, Queensland Reds winger Peter Hynes and Brumbies prop Ben Alexander.

Burgess, Mumm and Turner will be accompanied by 10 of their New South Wales team-mates in the 30-man squad, while Queensland have six representatives, including the oldest player in 32-year-old Sam Cordingley.

Stirling Mortlock has retained the captaincy but a host of players from the 2007 World Cup squad were not considered by the New Zealand-born coach due to injury.

Deans will guide the national team for the first time against Ireland in just under a fortnight at Telstra Dome in Melbourne.