Dallaglio has faith in new-look England

Former captain Lawrence Dallaglio is backing England's injury-depleted rugby tourists to give New Zealand a run for their money. [more] 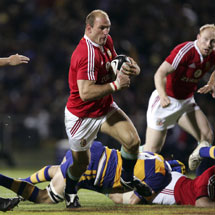 Former captain Lawrence Dallaglio is backing England’s injury-depleted rugby tourists to give New Zealand a run for their money.

His 20-year-old Wasps team-mate Dominic Waldouck was called up 24 hours before the party flew out on Monday but Dallaglio has no fears about the youngster facing the mighty All Blacks.

“Delighted for him,” was Dallaglio’s reaction after Waldouck’s England call, which followed his appearance in the Premiership final victory over Leicester Tigers in Dallaglio’s farewell on Saturday.

The youngster was not a regular in his club’s starting line-up for much of the season, but his selection was no surprise to Dallaglio.

“He’s a young player with enormous potential, enormous talent, has a couple of medals under his belt already and is doing very, very well,” he said.

“He’s had a few injuries this year and Riki Flutey’s come in but Dominic is a huge part of Wasps’ plans going forward.

“For them to have the confidence to put him straight into a final against a team like Leicester speaks volumes for the club’s faith in Dominic’s ability and he’s got his rewards with a place on the tour to New Zealand.”

Dallaglio, back at Twickenham to help launch the September 20 Help for Heroes match, which aims to raise more than £1million to treat troops injured in Iraq and Afghanistan, strongly believes England are not embarking on another summer “tour from hell”.

“The games are being played under the existing laws rather than the new ELVs (Experimental Law Variations) so it should benefit England.”

But he warned: “Make no mistake, New Zealand is a tough place to win. We won our first game there in 30 years the year we won the World Cup and we had a pretty good team then so it will be tough.

“But this England team has a lot of opportunities. A lot of guys will want to stake their claims for next season, there is a new coach in Martin Johnson and everyone will be fully aware that everything is up for grabs. You have to use that to your advantage.”