Scott Gibbs has backed Wales to win a Test match in South Africa for the first time in their history. [more] 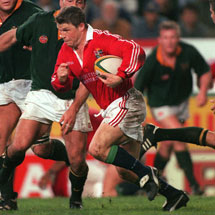 Scott Gibbs has backed Wales to win a Test match in South Africa for the first time in their history.

The legendary Welsh centre does not expect this year’s Grand Slam winners to emerge victorious in Saturday’s opening clash of the two-Test series in Bloemfontein but believes they can turn the tables on the world champions in Pretoria the following week.

“I do fancy Wales coming away from South Africa with at least one win under their belts,” said Gibbs, who experienced the winning feeling there with the victorious British Lions in 1997 when he was named player of the series.

But he warned: “The South African mentality will be to bully Wales, to say that these are the northern hemisphere champions, let’s run through them rather than round them.

“South Africa have emerged post-World Cup into a very strong side – but I think it will be a level series.”

Gibbs gives much credit to the new coaching regime of Warren Gatland, Shaun Edwards and Rob Howley for this year’s Six Nations triumph and knows they will not be resting on their laurels.

“Rest assured, I don’t think any Gatland-Edwards-Howley team will be ill-prepared,” said Gibbs, at Twickenham for the launch of the Help for Heroes match there on September 20, which aims to raise more than £1million for the Joint Services Rehabilitation Centre at Headley Court, Leatherhead, where troops injured in Iraq and Afghanistan are treated.

“They will be ready.”

After a gruelling season following last summer’s World Cup in France, he added: “It’s just relentless and Wales have suffered a few injuries, but I think this pool of players will relish the opportunity to play on that world stage.

“They are two of the best sides in the world at the moment but it’s a very tough place to play. You only have to ask the All Blacks and the Aussies so it’s a huge task for Wales.

“But the coaching trio have done wonders with that team and I’m sure they have a few tricks up their sleeves.

“Rugby is a game of inches and the coaching capabilities have shown that, with the preparation and the right mentality these guys have given them, the inimitable Welsh flair has been harnessed into something that is a winning formula.

“They will be looking to make sure they continue in that vein, albeit in a far more hostile environment than they have been before.

“Having had such a brutal season, it may be a little too intense this weekend to come up with a victory.

“I think that South Africa will physically be a little bit fresher for a Test match this weekend, but with another week’s preparation it could be different next week.”