Warren Gatland is determined for Wales to enhance the reputation of European rugby in the southern hemisphere following years of touring misery. [more] 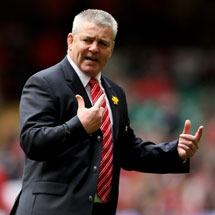 Warren Gatland is determined for Wales to enhance the reputation of European rugby in the southern hemisphere following years of touring misery.

Gatland admits the standing of the RBS 6 Nations south of the equator has justifiably been hit by a succession of hidings during summer tours.

But the Wales coach believes the strength of the Grand Slam champions’ squad proves they are seeking to making a statement during their two-Test series against South Africa.

"It’s not just down here that people don’t think the Six Nations is much cop, it’s all over the southern hemisphere," he said.

"We’ve got the conditions to improve and we have improved over the last six years, but the next three years is the real test for us.

"Often teams take their second-string sides down and have been well beaten. Some think that has devalued Test rugby in the few years before the World Cup.

"We’ve got a few injuries but have picked the best players available to us because South Africa, as world champions, deserve that.

"It’s important for all countries to value Test match rugby and that’s why we’ve come here with as strong a squad as we can."

The tour opens at Bloemfontein’s Vodacom Park tomorrow and as world champions the Springboks start as clear favourites.

Only five survivors from the World Cup final are included in the starting line-up as new coach Peter de Villiers seeks to use the series to experiment with some new combinations.

But with the likes of winger Bryan Habana, hooker John Smit and Butch James in action – and a fearsome bench to call on if in trouble – Gatland knows the Springboks remain feared adversaries.

"In the next couple of weeks we’ll know how much we’ve improved and how much better we have to do over the next few years," he said.

"I’ve been in South Africa on a number of occasions as a New Zealand player. It’s easy to earn the respect as a Kiwi player coming here

"I’ve been here as an Irishman when I was Ireland coach and that wasn’t so easy. Now I’m coming here as a Welshman.

"We know it’s an incredibly tough place to visit and earn respect and get results. We have to go out, play well and put South Africa under some pressure."

Wales arrived in South Africa as the European champions following their stunning clean sweep in the Six Nations but Gatland has little time for titles.