Franks in for All Blacks

Canterbury and Crusaders prop Ben Franks has been called into the New Zealand squad after John Afoa was injured during Saturday's 21-11 win against Ireland. [more] 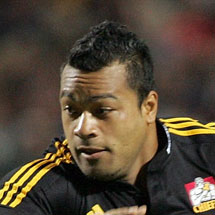 Canterbury and Crusaders prop Ben Franks has been called into the New Zealand squad after John Afoa was injured during Saturday’s 21-11 win against Ireland.

Afoa, who was playing in his fourth test, sustained a grade one tear to the medial collateral ligament in his right knee 30 minutes into the match at Wellington’s Westpac Stadium and will be out for between three and four weeks.

Franks, 24, is a former New Zealand Under-19 and Under-21 representative and will join the squad in Auckland as they prepare for the first of two Tests against England next Saturday.

New Zealand forwards coach Steve Hansen said that while it was disappointing for Afoa, who was back in the All Blacks for the first time in two years, he expected the Aucklander to bounce back well.

Hansen said: “That’s the nature of the game. He is well aware of that and he will work hard to get his leg right and come back in.

“He’s back playing good rugby, he played well last night until he got injured, and he has just got to concentrate on the positives.”

Greg Somerville, who was given a chance to freshen up after a tough few weeks with Super 14 champions, the Crusaders, will be back in contention for selection against England.

However, Tony Woodcock is unlikely to be available as he continues to recover from a badly bruised toe.

With scrummaging giant Carl Hayman now playing for Newcastle Falcons in the Guinness Premiership and in the absence of Somerville and Woodcock, Hurricanes team-mates Neemia Tialata and John Schwalger had to shoulder the burden against the Irish on Saturday when Afoa limped off.

Tialata easily made the switch from loosehead to tighthead.

And, after indifferent Super 14 campaigns, Tialata and Schwalger were more than a match for their much-vaunted opposites Marcus Horan, his replacement Tony Buckley, and John Hayes in the scrum and highly effective with the ball in hand and at the breakdown.

Tialata has been criticised for his lack of fitness and form during the Super 14 but All Blacks coach Graham Henry had nothing but praise for the 25-year-old.

Henry said: “He scrummed superbly I thought, both sides, and he carried well. The game was fairly close to him, the ball was close to him so that was probably an advantage (in that he didn’t have to run too far from the rucks) but he will certainly feel a lot happier in himself and will have got a lot of confidence out of tonight.”

“We’ve believed in him for a long time and he’s believed in himself. He’s had one or two problems with foot injuries and calf injuries which have impeded his fitness I guess, but he’s worked hard since the Hurricanes finished and he’s in far better shape now than he probably was then and he’s still going to work hard on it.

“He is an international prop. His preferred position is loosehead but he’s a bloke who can play tighthead and they are like hen’s teeth blokes who can do both jobs.”

Tialata and Schwalger are more than likely going to have to back up against England at Eden Park, although Somerville will probably start against England’s powerhouse loosehead Andrew Sheridan.

And Henry revealed he had been contacted by former All Blacks front-rower Craig Dowd during last week who told him not to under-estimate the tourists.

“Craig Dowd emailed me during the week and he said ‘don’t take the English lightly they’ve got a very good side coming’.

“They’ve got a big forward pack and a lot of experience there again.”