Loftus and the Lions

The memories came flooding back for the 2009 British & Irish Lions management duo of Gerald Davies and Ian McGeechan when they visited the world renowned Loftus Versveld stadium in Pretoria. [more] 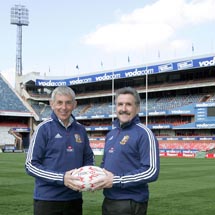 The memories came flooding back for the 2009 British & Irish Lions management duo of Gerald Davies and Ian McGeechan when they visited the world renowned Loftus Versveld stadium in Pretoria.

The home of the Super 14 side, the Bulls, and the Vodacom Cup and Abs Currie Cup outfit, the Blue Bulls, is set to host the second of next summer’s three Tests between the world champion Springboks and the Lions on Saturday, 27 June.
It is a ground of which both Davies, who is Tour Manager for the Lions in 2009, and McGeechan, who will be Head Coach, have fond playing memories. As part of the 1968 Lions tour party, Davies played at centre in a 22-19 victory over Northern Transvaal in Pretoria, while McGeechan notched two victories there with the all conquering 1974 tourists.
On 22 June, 1974, McGeechan dropped a goal to help the Lions beat the Springboks 28-9 in the second Test to take an unassailable lead in the series. Two weeks later he switched to outside half for the 16-12 victory over Northern Transvaal.
Loftus has been a very happy hunting ground for the Lions down the years. Robin Thompson’s 1955 tourists went 2-1 up in the series against the Springboks with their 9-6 win there, while the 1974 side notched a 19 point victory.
It was also the scene of the only Test win for Bill Beaumont’s 1980 Lions in the fourth and final Test. Their 17-13 victory came in front of a crowd of 68,000.
The capacity for the now all-seater stadium in 2009 will be 51,762 – making it the fifth biggest ground in South Africa.
It will also be a venue that McGeechan will recall vividly from the last Lions tour to South Africa 11 years ago because it was the one at which his side lost their only non-Test fixture.
Adriaan Richter’s Northern Transvaal team pipped McGeechan’s side 35-30m with the back row man urging his side on with one of the tries and Casper Steyn notching 20 points.
The ground itself is named after the founding father of organised sport in Pretoria, Robert Owen Loftus Versfeld. Originally known as the Eastern Sports Ground, it was christened Loftus Versfeld in 1932 following Robert’s death. The 1955 tour party were the first Lions team to play at the venue and the 2009 Test will be11th played there by the Lions