England skipper Steve Borthwick was full of praise for his side's "faultless effort" against New Zealand, but he wants to cut down on the errors for next weekend's second Test in Christchurch [more] 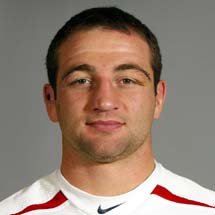 England skipper Steve Borthwick was full of praise for his side’s "faultless effort" against New Zealand, but he wants to cut down on the errors for next weekend’s second Test in Christchurch

The All Blacks picked up four tries in their 37-20 win at Eden Park, but Borthwick’s men did manage to score two tries and held the home side scoreless in the final 35 minutes after falling 24 points behind.
“The effort was faultless, but we need to analyse this performance and work hard to be better next week. We need to cut the error rate,” said Borthwick.
“We simply made too many errors. New Zealand were very clinical and they took their chances very well – we need to find out how to stop them going forward.”
The All Blacks haven’t been beaten on home soil since 2003 and skipper Richie McCaw praised England for their physicality.
“It was the most physical game we have had all year. It was certainly a step up,” admitted McCaw.
“It was a tough game but, all in all, we are happy. We took some opportunities and, when we got some space for the backs to use, it was pleasing.”
England debutant Topsy Ojo was roared on by his father and brother, who had flown to Auckland to help him celebrate his first cap. It turned out to be a good night for the London Irish wing.
“I couldn’t have wished for a better debut, other than winning as well, and I won’t forget this day for the rest of my life,” admitted Ojo.
“We were given a bit of a lesson out there. We are really disappointed at he mistakes we made.
“At this level little errors cost you points and we made costly errors in two periods.
“But we need to be proud of this performance, keep our heads high and have another crack at them next week.”