ELVs no problem for Lions

Ian McGeechan isn't worrying about the impact the new Experimental Law Variations will have ahead of next year's British & Irish Lions tour to South Africa. [more] 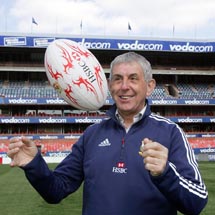 Ian McGeechan isn’t worrying about the impact the new Experimental Law Variations will have ahead of next year’s British & Irish Lions tour to South Africa.

The Lions Head Coach will get his first chance to operate under them when he launches the defence of London Wasps’ Guinness Premiership title next season.
That is when the ELVs, which have been trialled at all levels in the southern hemisphere this year, will go global and incorporate the game in the north. By the time McGeechan’s Lions travel to South Africa next May the British and Irish players will have had a full season with them.
“I’ve said it before, to me the key word is experimental. We’ll see how they go,” McGeechan told South African journalists in Johannesburg.
“We are all going to be under the same group from 1 August, so we have got to play them to make sure we can find out all the nuances that will go with them. It is critical that I’m going to be coaching on a week-to-week basis with them in place.
“As a coach, you need to be looking at them, looking at their challenges and looking at how to find the best answers tactically to use them and to play with them. “Ultimately, it is the professional game that will find them out or verify them. I don’t think that that has happened yet.
“There are a lot of question marks that will hopefully be sorted out as both the north and south play to the same group of ELVs over the next 12 months.”
Given the Springboks will have had greater domestic and international experience under the new laws than the Lions there are some that feel the world champions will have an advantage when they seek to avenge their 1997 defeat by McGeechan’s Lions.
“I think the current ELVs might favour the Springboks, but the ones that we are switching to on 1 August are the ones that will carry through for everybody for the next 12 months,” added McGeechan.
“And I don’t think that they will favour the Springboks as there will be changes again. The significant ones are the maul and the line-out.
“We’ll all have all been playing more or less at the same time and those are the ones I think are critical. Thankfully, the free-kick variation won’t be there because that more than anything to me stops the referees refereeing, gives you pretty much a free for all and not a lot of specific tactical rugby.”