Burger back for Boks

Former IRB World Player of the Year Schalk Burger is fit to fight for his place in the Springboks back row against Italy this weekend. [more] 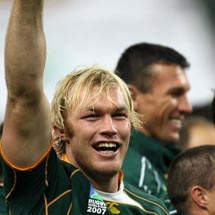 Former IRB World Player of the Year Schalk Burger is fit to fight for his place in the Springboks back row against Italy this weekend.

New South African coach Peter de Villiers will have to face up to his embarrassment of back row riches before going head-to-head with the former South African coach Nick Mallet, with who he worked with the Boks a decade ago.
With the start of the Tri- Nations only three weeks away from this weekend the Italian fixture is de Villiers; final chance to experiment.
Luke Watson, Juan Smith and Pierre Spies led the charge for the world champions in their 2-0 Prince William Cup series triumph over Wales from the back row, but Burger’s availability is bound to give the coaching team a few headaches.
At his best, Burger is one of the biggest impact players in the world game and someone any coach would love to have in his side. While the 2008 Tri Nations is the immediate goal, next year’s British & Irish Lions tour is another huge target for the player.
Burger picked up a knee injury during the Super 14 tournament, but has battled back to fitness sooner than expected. It means de Villiers will now either have to break up his new combination, or work Burger into his plans off the replacements bench.
The Italians aren’t expected to provide much opposition. They still have skipper Sergio Parisse playing in the French Championship with Stade Francais Paris and are seven props down.
Ironically, the last time Italy were in South Africa Mallet was the Springbok coach. That was back in 1999 and the home side ran out winners by 101-0 in Durban and 60-14 in Port Elizabeth.