The Springboks' World Cup winning scrum half Fourie du Preez is likely to be out of action for even longer than first feared because of his broken hand. [more] 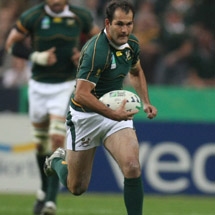 The Springboks’ World Cup winning scrum half Fourie du Preez is likely to be out of action for even longer than first feared because of his broken hand.

The world game’s top No 9 had hoped to be fit again in time to start the Tri-Nations tournament, but those plans have now been put on hold.

After meeting with new coach Peter de Villiers, du Preez has decided to miss the three away Tests at the start of the Boks’ Tri-Nations campaign – two in New Zealand and one in Australia – and instead make a rather lower key return to action on home soil.

Having broken his hand during the Bulls Super 14 campaign, du Preez is now pencilling in an ABSA Currie Cup game with the Blue Bulls on 12 July. When the Cheetahs are the visitors to Loftus Versveld.

If all goes well for the Bulls captain, he should be in line to re-join the Springboks for their one off Test against Argentina on 9 August. After that he could feature in the home matches in the Tri Nations tournament.

Du Preez wil be one of the biggest threats to Ian McGeechan’s 2009 British & Irish Lions when they tour South Africa next year.