New Zealand piled on the misery as England ended with another comprehensive 44-12 defeat to the rampant All Blacks. [more] 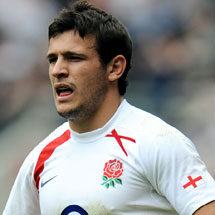 New Zealand piled on the misery as England ended with another comprehensive 44-12 defeat to the rampant All Blacks.

Danny Care and Tom Varndell scored for England but they had little answer to the destruction orchestrated once again by Dan Carter.

The All Blacks fly-half finished with his second 22-point haul in successive weeks against England, including one of New Zealand’s five tries.

Debutant centre Richard Kahui opened the rout and was joined on the scoresheet by Ma’a Nonu, Sione Lauaki and Jimmy Cowan.

England made five changes to the back division in a bid to halt New Zealand’s powerful runners.

After the 37-20 first Test defeat, defence coach Mike Ford said he was “embarrassed” at England’s inability to defend from the set-piece.

It was little better on Saturday as Carter and Lauaki both scored straight from close-range scrums.

England were 10-0 down inside 13 minutes after Carter slotted his penalty – he did not miss a kick in either Test – and then sent Richard Kahui racing over for his debut try.

Carter extended New Zealand’s advantage with a second penalty from the touchline before missing a high ball in his own 22 that gave England a sniff of the line.

Luke Narraway sent Varndell racing down the left but All Blacks full-back Leon MacDonald recovered to force the Leicester winger into touch as he dived for the line.

Carter then cruised over for the All Blacks’ second try as captain Richie McCaw limped off with an ankle injury.

Mathew Tait nearly scored after chasing his own chip forward but England went into the interval 20-0 down.

Things did not get much better after the restart when Olly Barkley, who had replaced the injured Toby Flood, missed a penalty from in front of the posts.

Carter showed him how it was done with a 40-metre effort before Care darted over from close range after New Zealand’s scrum had been penalised.

But almost immediately it was cancelled out as New Zealand launched another devastating raid as Sitiveni Sivivatu shredded England’s defence before releasing Nonu to score.

Lauaki charged over for the fourth after Mike Tindall had been sin-binned for killing the ball.

Tait provided a delightful pass for Varndell to score on his return to the England team after two years out.

Replacement scrum-half Cowan applied the final nail in England’s coffin by scampering over for the All Blacks’ fifth try with the last attack of the game.