CJ to see Lions close up 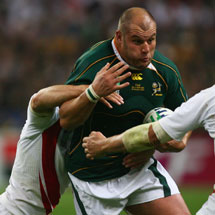 Van Der Linde, who currently has 50 international caps and a World Cup winners medal to his name, has agreed a three-year deal from the Free State Cheetahs.

Comfortable on either side of the scrum, the 28-year-old is expected to be in contention for a starting place against the Lions next year having recently been named in the South African squad for the away legs of the forthcoming Tri Nations.

“I am very excited about my move to Leinster on a three year contract,” said Van Der Linde.

“I have always wanted to be part of a team capable of lifting the Heineken Cup, a trophy that has always been one of my goals, and it is important the team builds on its Magners League success.

“It was a tough decision leaving the Free State Cheetahs, Currie Cup champions in South Africa from 2005-’07, but I would like to thank my family, close friends and all the Cheetahs followers who have given me incredible support over the years. I look forward to joining the team after the 2008 Tri-Nations Championship in August.”