Fifty-three years ago the British & Irish Lions became the first team to meet the Springboks in a Test match at Loftus Versveld, Pretoria. [more] 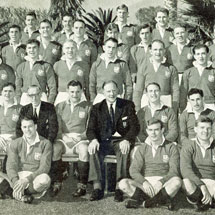 Fifty-three years ago the British & Irish Lions became the first team to meet the Springboks in a Test match at Loftus Versveld, Pretoria.

A year hence, on Saturday, 27 June, 2009, Ian McGeechan’s side will defend the Lions’ unbeaten Test record at the ground in the second of their three internationals.

So, in the first of our series of ‘Great Lions Tests’, we want to take you back to that momentous day in Pretoria when Robin Thompson’s 1955 Lions met the Springboks in the third of four Tests.

The 1955 Lions are still regarded as one of the greatest teams to tour South Africa. With thrilling backs like Cliff Morgan, Tony O’Reilly and Jeff Butterfield, they charmed the South African fans with their try scoring ability. In the 12 matches up to the first Test, the Lions ran in 55 tries, conceded only eight and kept their line intact to half of the games.

The tour didn’t get off to the greatest of starts because the Lions actually lost the first of their 25 fixtures, 9-6, to Western Transvaal in Potchefstroom. Things picked up after that and there was only one more defeat, 20-0, to Eastern Province, before the first Test in Johannesburg on 6 August.

That first Test became a true epic with the Lions triumphing 23-22 in front of 95,000 fans. The Boks gained revenge with a 25-9 victory in Cape Town two weeks later to set the stage for the third Test.

Springbok coach Danie Craven dropped five players after the first Test defeat, making two changes behind the scrum and three up front, and made two more for the third Test after the victory in Cape Town. He brought in Free State scrum half Coenraad Strydom to replace the diminutive Tommy Gentles and had to introduce Western Province No 8 Butch Lochner into his back row at a late date when Dan Retief withdrew.

The Lions had made only two changes from the first to second test, Gareth Griffiths taking over from Cecil Pedlow on the left wing and Tom Reid coming into the back row for Reg Higgins.

There were two further changes in personnel for the third Test and two positional switches. With the tour captain Robin Thompson unfit, Tom Reid moved up into the second row and Clem Thomas came into a reshuffled back row in which Robins moved to No 8.

Behind the scrum, Doug Baker took over from the unfit vice-captain, Angus Cameron. Cliff Morgan was given the captaincy and fellow Welshman Billy Williams led the pack.

Cliff Morgan won the toss and decided to choose ends rather than kick-off. It was the Springbok outside half Clive Ulyate who got the game started. It was a tense affair and the home side got the first chance to score when Johan Classens lined-up a long range penalty in the first five minutes.

That kick drifted wide and in the eighth minute the Cardiff wing Gareth Griffiths slipped his marker, went outside the cover and was only pulled down inches short of the line.

Griffiths’ wing partner Tony O’Reilly did actually cross the Springbok line, and run behind the posts, for what many of the fans thought was a try, but the Lions touch-judge, the Old Millhillians and England scrum half Johnny Williams, had his flag up to indicate a foot in touch 15 metres out from the line.

Classens had earlier missed with a second long range penalty, so the England centre’s snap drop goal remained the only score of a pretty dour first-half.

The pressure continued from the Lions and Butterfield’s co-centre Phil Davies suffered the agony of losing the ball over the Springbok line after a strong burst. The emergency full back Doug Baker then doubled the Lions’ lead with a 30 metre penalty on 51 minutes.

A scrum infringement five metres inside the Lions half then gave Stephen Fry’s men a chance to aim for goal. After two misses, Classens was overlooked and full back Roy Dryburgh stepped up to drop kick the penalty and cut the deficit.

The next score would be crucial and when Ulyate was caught in possession 10 metres out from his own try line on the hour the Lions were handed a golden opportunity to strike. The ball was recycled, Clem Thomas picked up and ran to the blindside before giving a scoring pass to Butterfield.

His corner try gave the Lions some breathing space, although Dryburgh’s second penalty two minutes later meant there was still all to play for in the final 18 minutes.

Could the Lions hang on and go 2-1 up in the series with one Test to play? Dryburg missed for the first time, again from long range, after Dickie Jeeps had been penalised and then the full back was wide with a drop goal attempt.

Home fans thought flanker Dawie Ackermann had crossed the Lions line after one forward drive, but referee Ralf Burmeister said ‘No’. There was one final chance for the home side when Baker knocked on right on the Lions try line from a last gasp Dryburg penalty attempt.

It was a golden scoring opportunity with virtually the last move of the game. The Springbok backs split either side of the scrum and the ball eventually went left to Wilf Rosenberg.

Had he been expecting the pass, and gathered cleanly, there might well have been a try on the wing for Karel von Vollenhoven.

Instead, Rosenberg went for a drop goal and had his kick charged down by the alert Thomas.

The last chance had gone for the Boks and so ended an amazing week for the Lions in Pretoria. The previous weekend they had beaten Northern Transvaal 14-11 at Loftus and now they had taken the lead again in the four match Test series with a 9-6 triumph.

Danie Craven (Springboks Coach)
Before the series – "If I had the Springbok team for three weeks they would win the series. Our opponents are one of the best sides ever to come to South Africa."

After the third Test – "The Lions deserved their victory, for they were the better side, even though I thought Ackerman did get a try in the closing minutes. If the try had been allowed, the Springboks would not have deserved to draw."

Cliff Morgan (Lions captain)
"I’m very proud at having led the Lions to victory and now my one ambition is to lead Wales. I expect they will be delighted with the result back home."

THE LIONS AT LOFTUS VERSVELD