South Africa scrum-half Fourie du Preez has turned down an offer from the Cardiff Blues and re-signed with the Bulls franchise until the end of the 2010 season. [more] 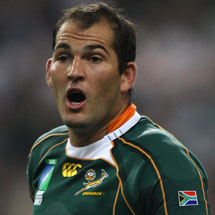 South Africa scrum-half Fourie du Preez has turned down an offer from the Cardiff Blues and re-signed with the Bulls franchise until the end of the 2010 season.

Du Preez, who was part of the victorious World Cup squad, decided to stay in Pretoria to play against the British and Irish Lions next year.

"There has been a lot of challenges lately and I did consider playing abroad after receiving a number of huge offers but my goal is to once again establish myself as the country’s first-choice scrum-half," Du Preez said.

"I desperately want to play against the British Lions for the Springboks and the only way I will be able to do that is through consistent good performances in the Absa Currie Cup and Vodacom Super 14."

Du Preez said the Bulls went through a learning curve with the chance in coaching personnel but he believes the team is now ready for the next chapter.

"The Super 14 was difficult for all of us and I had my doubts, but we’ve stabilised and I want to be part of the new era.

"Players like Francois Hougaard and Heini Adams will continue to put pressure on me and I think that will compel me to lift my game. The competition will definitely improve my game and I think I can make a contribution to their development as well.

"I have always been very happy at the Bulls and to have played under Heyneke Meyer for seven years was the best time of my life. There is a wonderful family culture here and I want to stay part of it. Our wives are happy and we are all good friends."

Blue Bulls coach Frans Ludeke said: "Fourie was part our structures since he was at school and he first played for us as a 19 year old when Joost van der Westhuizen was still around.

"I have never doubted his passion for Springbok and Blue Bulls rugby and his loyalty is unprecedented. He is not only a world class player but also an unbelievable leader and team player.

"He is already doing a great deal to help to develop the up-ad-coming youngsters. He does not hesitate to assist the inexperience players and we rejoice over the fact that he wants to stay within our structures."