McGeechan and Davies on the 2009 Lions 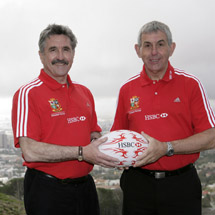 They visited all three Test cities, Pretoria, Cape Town and Johanessburg, and saw new Springbok coach Peter de Villiers get his reign off to a flying start with two victories over the Six Nations champions, Wales.
They will be back in South Africa in August for the world champions’ Tri Nations games against New Zealand and Australia, when McGeechan will get his first sight of next year’s opponents operating under the new Experimental Law Variations.
Here, in the first of a regular ‘Lions Talk’ column that will be exclusive to members of the Suppoprters Club, are their thoughts on what they found as the countdown to the 2009 Lions tour begins in earnest.

DAVIES ON THE 2009 LIONS TOUR
“There is already great anticipation in our country of what is to come. It is only a four year cycle, but the Lions is a magic name in world rugby.
“There is a magic quality that attaches itself to the Lions and it is great that we are back on the road and coming to South Africa.
“It is not only a significant rugby event – the Lions verses the Springboks is a significant worldwide sporting event."

MCGEECHAN ON RUGBY IN SOUTH AFRICA
“I’ve always enjoyed the rugby here and I think a lot of British & Irish players will say they were influenced by playing rugby here or playing against the Springboks.
“It’s a great tour to be looking forward to and, for Gerald and myself, our trip in June was really only the beginning. It was a chance for the two of us to come together to look at hotels and training grounds and to examine our own structures.
“It gave us the chance to assess what we want to do and how we want to run the tour. The game has moved on since I was last in South Africa in 1997. Then the game had only just gone professional and it was very different from now.”

MCGEECHAN ON THE CHALLENGE OF BLENDING PLAYERS FROM FOUR NATIONS
“The biggest challenge for any Lions tour is coming together quickly because it is not like any other international side. We will have to find ourselves first and then put something together that makes us competitive.
“Having said that, there are some traditional things that I believe are important about the Lions, about getting the squad together. How you do that is a challenge.
“It’s a mix of the traditional with the professional. This is the longest tour the players will go on other than the World Cup – 10 games over seven weeks is a challenge that you only meet in the modern game as a Lion.”

MCGEECHAN ON THE IMPORTANCE OF DISCIPLINE
"With the Lions, you have to respect everything you do on and off the field. That discipline and that behaviour is important to me, you don’t just turn it on when you cross the touchline.
"You respect your team-mates and, especially with the Lions, you respect the people of the country in which you are touring. You cannot afford to lose that respect. Discipline is second to none and it should be better than anything you do at home.
"We have been a professional game for 11 years now and all the things that go with that the players have to take on board. You have to have a strong code of conduct – that is key.
"If you agree it with the players, then it’s black and white – there are no grey areas. I don’t think there is any reason not to say ‘this is what we are buying into, what we accept and, if we don’t behave that way, there will be consequences."

MCGEECHAN ON THE ELVs
“We are all going to be under the same group from 1 August, so we have got to play them to make sure we can find out all the nuances that will go with them. I’ve said it before, to me the key word is experimental. We’ll see how they go.
“As a coach, you need to be looking at them, looking at their challenges and looking at how to find the best answers tactically to use them and to play with them. That’s why it is critical that I’m going to be coaching on a week-to-week basis with London Wasps.
“I think the current ELVs might favour the Springboks, but the ones that we are switching to on 1 August are the ones that will carry through for everybody for the next 12 months.
“And I don’t think that they will favour the Springboks as there will be changes again. The significant ones are the maul and the line-out.
“We’ll all have all been playing more or less at the same time and those are the ones I think are critical. Thankfully, the free-kick variation won’t be there because that more than anything to me stops the referees refereeing, gives you pretty much a free for all and not a lot of specific tactical rugby.
“Ultimately, it is the professional game that will find them out or verify them. I don’t think that that has happened yet.
“There are a lot of question marks that will hopefully be sorted out as both the north and south play to the same group of ELVs over the next 12 months.”