Scotland head coach Frank Hadden has been assured his future is safe with the national team following the drawn Test series in Argentina. [more] 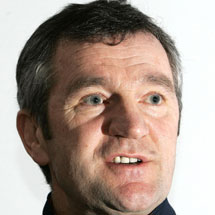 Scotland head coach Frank Hadden has been assured his future is safe with the national team following the drawn Test series in Argentina.

This year’s disappointing Six Nations campaign in which Scotland won just one match led to calls for Hadden to be replaced from some quarters, however the SRU have continued to back the 53-year-old former Edinburgh coach.

McKie said: “We are right behind Frank and we want him to carry on and to take the team back to where we want to be, and to see us through a very successful autumn Test window.”

The Scots lost their opening Test in Argentina earlier this month but hit back with an impressive 26-14 win in Buenos Aires to tie the series.

McKie was impressed by the performance, and told BBC Scotland: “The team was very competitive, and if they play like that in the games in November, first up New Zealand followed by South Africa, I’d be hopeful that we’d give a good show.”

He added: “In the second Test they played extremely well.

“Not only did Frank take a lift from that, but the players and the squad did as well.

“It was such a great game to watch that I’m hopeful we’ll take something from that when they come back here and play in November.”

Hadden’s target in the Six Nations is a 40% victory record, which his team were unable to deliver this year.

However McKie sees good reason to be optimistic for the future of the Scotland national team under the current leadership.

“We’re very pleased with what’s happened in the last 12 months,” he said.

“Obviously we’re disappointed [with some results] but the margin of winning and losing in international rugby is a very narrow one. With slightly more success in terms of injuries and the rub of the ball, hopefully that team can come back and try to win games.”