Beating New Zealand on their home soil will be tougher than winning the World Cup, according to South Africa lock Victor Matfield. [more] 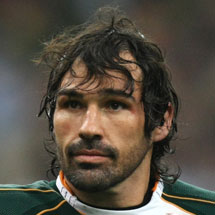 Beating New Zealand on their home soil will be tougher than winning the World Cup, according to South Africa lock Victor Matfield.

Matfield was part of the triumphant Springbok side that defeated England in Paris last year, but the 31-year-old has had only three wins against New Zealand in 14 Tests so far and has never tasted success against the All Blacks in New Zealand.

The second rower, who led the Bulls to the 2007 Super 14 title, is hoping that will change in next Saturday’s Tri-Nations opener at Westpac Stadium in Wellington.

“It’s one of the things I definitely still want to do is get a win in New Zealand. Hopefully it’s not too far away,” he said after arriving in the New Zealand capital late on Friday night.

“But it’s probably tougher than winning the World Cup, to come here and beat New Zealand in New Zealand, so it’s a great challenge and we’ve got two opportunities so let’s see what we can do.

“We know what it takes to win and it’s not going to be easy and like the coach said it’s all about taking your chances on the day.”

The last time South Africa defeated New Zealand on their home turf was in 1998, when they won 13-3 at Wellington’s Athletic Park stadium.

The All Blacks will be without inspirational captain Richie McCaw for at least six weeks after he tore a ligament in his left ankle against England last weekend which is likely to rule him out of the first four matches of the Tri-Nations.

There is also an injury cloud hanging over experienced lock Ali Williams who was also forced from the field with an ankle injury during the second Test in Christchurch.

But Matfield refused to buy into the notion an inexperienced All Blacks side were vulnerable and that next Saturday’s match represented the best chance his side had to break their 10-year New Zealand hoodoo.

“It’s difficult to say,” he added. “I think we had chances in the past and we didn’t use them. We last won here in ‘98 which is a long time ago.

“We’re looking forward to the game and we’re confident and we want to go out there and test ourselves against one of the best sides in the world.”

Coach Peter de Villiers agreed that even without McCaw New Zealand would provide a stern challenge.

“If anyone comes to New Zealand and thinks it’s going to be an easy trip they’re fooling themselves,” he said. “They invented this game in England but they perfected it in New Zealand.”