There will be no escape from powerful Springbok lock Bakkies Botha for the 2009 British & Irish Lions. [more] 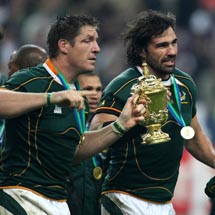 There will be no escape from powerful Springbok lock Bakkies Botha for the 2009 British & Irish Lions.

The World Cup winning second row had been seeking a move from the Blue Bulls to big spending Toulon, but a Labour court in South Africa has ruled he must honour his domestic contract.
Botha signed a new deal with the Blue Bulls in 2006 and had his transfer request to move to France turned down by the South African rugby authorities. That led to a court battle that finally went against the player.
It means he will have to see out the remainder of his three year contract at Loftus Versveld – and be available to Springbok coach Peter de Villiers for next year’s Test series against the Lions.
He could also feature in the opening game of the nine match tour when the Blue Bulls players join forces with other teams to form the Highveld XV that will test Ian McGeechan’s side in Rustenburg on 30 May.
Botha is currently in the Springboks squad that is preparing to travel to New Zealand to launch their Tri Nations campaign. The Boks haven’t won in New Zealand since 1998.