South Africa coach Peter de Villiers has revealed fly-half Butch James is in danger of losing his place in the team if he continues to play his club rugby outside of the country. [more] 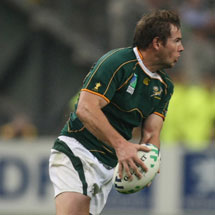 South Africa coach Peter de Villiers has revealed fly-half Butch James is in danger of losing his place in the team if he continues to play his club rugby outside of the country.

James established himself as the Springboks’ fly-half last year and was instrumental in their World Cup victory.

He then moved to Bath after the tournament in France but was called back for international duty for the Tests against Wales, where he played a key role in the 2-0 whitewash of the RBS 6 Nations champions.

However, a new International Rugby Board ruling which limits the amount of Tests players can play for their country has prompted De Villiers to reconsider his selection of overseas-based players.

BJ Botha, who has signed for Irish club Ulster, has already been dropped from the squad for the upcoming Tri-Nations.

And De Villiers also intimated that another Bok, CJ Van der Linde, was fortunate to be included after signing a three-year contract with Leinster this week.

“The problem with the ruling is that players can only play a certain amount of Tests and we need to decide where to utilise these players best,” De Villiers told Sondag.

“Players at overseas clubs will become ‘special players’ to us that we will use in a crisis.

“In CJ’s situation, he signed a three-year contract and it makes it difficult to bring him back.

“The November Tests are in the middle of the Northern Hemisphere season and we want players to base themselves in South Africa.”

De Villiers also admitted the same rules apply to James if he fails to sign for a South Africa-based side.

“If there isn’t a result there, it will be difficult to pick him for the team,” the coach added.