Masoe out to make his mark

New Zealand loose forward Chris Masoe is determined to make the most of his second chance in the squad. [more] 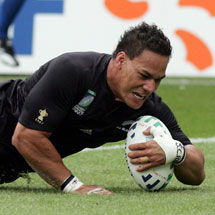 New Zealand loose forward Chris Masoe is determined to make the most of his second chance in the squad.

The 29-year-old missed out on All Blacks coach Graham Henry’s initial 26-man selection but has earned a recall for the two Tests against South Africa after captain Richie McCaw was sidelined for six weeks with an ankle injury.

Masoe, who earned his 20th cap in the World Cup quarter-final defeat to France in Cardiff, admitted finding out he had missed the cut earlier this month had been a bitter pill to swallow.

“It was pretty tough,” he said. “It takes a couple of days or a week to get over it because playing for the black jersey is a huge honour.

“[But] I’ve got another opportunity and any opportunity I’ve got to take. I’m looking forward to it and to giving my all.”

Masoe has been playing club rugby in Wellington for the past three weeks while most of his All Blacks team-mates have been involved in Test matches against Ireland and England.

But he is unconcerned about the step up he will face should he play against South Africa in Saturday’s opening Tri-Nations match at Westpac Stadium in Wellington.

“I’ve been back training for Wellington for two weeks and the fitness is always there,” he said. “I’ve been playing a little bit of contact (rugby), playing club rugby is always good. It was enjoyable.

“It wasn’t the best rugby but it was contact and I was pretty pleased to get that in.”

It is unlikely Masoe will start against the Springboks on Saturday, despite the fact he is the only man in the squad with genuine experience at openside flanker, with Henry likely to opt for Adam Thomson and Rodney So’oialo in a left-right combination with Jerome Kaino at number eight.