Meyer crosses over to Tigers

Former Blue Bulls coach Heyneke Meyer will be able to judge the Springboks' opposition first-hand ahead of the 2009 Lions tour after he filled the vacant head coach's role at Leicester Tigers on Monday afternoon. [more] 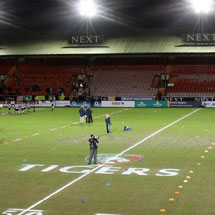 Former Blue Bulls coach Heyneke Meyer will be able to judge the Springboks’ opposition first-hand ahead of the 2009 Lions tour after he filled the vacant head coach’s role at Leicester Tigers on Monday afternoon.

Meyer, who led the Bulls to Super 14 glory in 2007, replaces Marcelo Loffreda at Welford Road having originally been in the running for the job of Springboks head coach prior to Peter de Villiers’ appointment.

After missing out on the top job with his home nation, Meyer originally cut all ties with senior rugby, taking up a job with a sports supplemation company instead. At the time, Meyer was quoted as saying, "to coach the Springboks was my last remaining dream in rugby".

As well as being two-times Heineken Cup winners and five-times Premiership winners, Leicester Tigers have had their share of British and Irish Lions, a record that may well continue in 2009. The Tigers contributed seven tourists to the 2005 series in New  Zealand, with Neil Back, Martin Corry, Lewis Moody, Geordan Murphy, Graham Rowntree, Ollie Smith and Julian White all earning selection for the original squad.

"I am humbled a club like Leicester has considered me,” said Meyer. “I am very thankful they have appointed me and I am looking forward to getting started.

"I have a lot of respect for what the club has achieved in the past and I have been impressed with everybody I have met from the club. I know there are a lot of competitive clubs in the Premiership and I am looking forward to the challenge with Leicester Tigers."

Meyer will take up his position prior to the start of the new season, with the Tigers looking to build on five finals appearances in the past two years.