Cowan on bench for New Zealand

Jimmy Cowan will be on the bench for Saturday's opening Tri-Nations match against South Africa. [more] 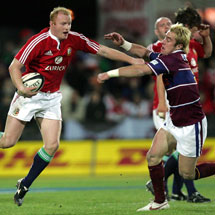 Jimmy Cowan will be on the bench for Saturday’s opening Tri-Nations match against South Africa.

The scrum-half’s inclusion had been in doubt pending the outcome of a New Zealand Rugby Union misconduct hearing at NZRU headquarters in Wellington.

But the 26-year-old has avoided dismissal after being found guilty of serious misconduct and instead has been fined NZ$3000, banned from drinking alcohol and ordered to seek alcohol counselling as condition of his ongoing employment.

Cowan is facing three charges of disorderly behaviour relating to two incidents in Dunedin and one in Invercargill between April and June this year.

The latest charge by Dunedin police was laid on Tuesday and relates to an incident outside a Dunedin nightclub on April 5 which has already seen his Highlanders team-mate Lucky Mulipola convicted of assault, sentenced to 180 hours’ community service and ordered to pay NZ$5000 emotional harm reparation to the victim.

All Blacks coach Graham Henry admitted the situation regarding Cowan had been an unwelcome distraction in the build-up to the Test at Wellington’s Westpac Stadium.

"It’s disappointing, annoying and disruptive but as you can appreciate we’ve just got to focus and get on with our preparations for the Test match," said Henry.

There were no surprises in the team announced by Henry on Tuesday.

As expected Adam Thomson, newly-appointed captain Rodney So’oialo and Jerome Kaino got the nod in the loose forwards in the absence of Richie McCaw, while Conrad Smith returns at centre despite Richard Kahui’s impressive debut against England, and Mils Muliaina replaces Leon MacDonald at full-back.

In the front row Tony Woodcock will make his first start after returning from injury off the bench against England and Ali Williams was named at lock despite taking limited part in training so far because of an ankle injury.

"I wouldn’t say he was 100% but he is working his way towards that. He had a run today on his own and he will train with us for a limited amount of time tomorrow and we’ll build on that on Thursday," said All Blacks forwards coach Steve Hansen.

"He’s pretty confident that he’s going to be all right."

Hansen revealed the decision to opt for Thomson, So’oialo and Kaino in the loose forwards ahead of bringing in Chris Masoe at openside had been an easy one.

"Both Adam and Rodney are comfortable on the sides of the scrum and in the game that Jerome has played so far for us he has played well," he added. "It wasn’t a difficult decision."