France coach Marc Lievremont has created history by picking one of his own brothers for this Saturday's second Test against Australia in Brisbane. [more] 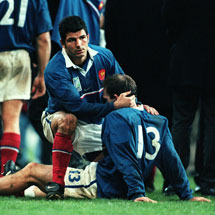 France coach Marc Lievremont has created history by picking one of his own brothers for this Saturday’s second Test against Australia in Brisbane.

Following a 34-13 first Test defeat in Sydney, Mathieu Lievremont is set to make his international debut at the age of 33.

His inclusion means three Lievremont brothers will have represented their country at senior level, with Matthieu joining Marc and Thomas as a French international.

“I know it was a hard decision to make,” said the new France coach. “I didn’t want to hear about it at first but we need players like him.

“Mathieu has been excellent every weekend in the Top 14; he is the best on the field on a regular basis. He will be a player like any other but maybe I will kiss him hello in the morning while I shake hands with the others!”

The trio become only the fourth set of three brothers to earn international recognition, following Arthur, Bert and Robert Gould of Wales, Ponty, Jack and Tuan Jones, also of Wales, and Paul, Richard and David Wallace from Ireland.

Only the Tuilagi family can claim to have produced more brothers with senior international honours. Freddie, Henry, Alesana and Anitelea having all earned caps for Samoa. Younger brothers Vavae and Manu are other possible internationals from the Tuilagi family, although the latter has been tipped to represent England at schoolboy level.