Springbok skipper John Smit could miss this weekend's second Tri-Nations Test against the All Blacks in Dunedin because of a groin injury. [more] 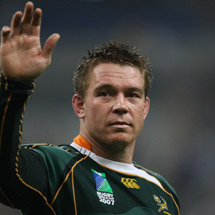 Springbok skipper John Smit could miss this weekend’s second Tri-Nations Test against the All Blacks in Dunedin because of a groin injury.

The World Cup winning captain failed to come out for the second half of his side’s first defeat in 14 games in Wellington on Saturday after picking up a groin injury.
The All Blacks went on to win the game19-8 and Springbok coach Peter de Villiers has summoned Stomers hooker Schalk Brits to New Zealand to provide cover for his captain.
The injury occurred when Smit was up ended in an after-the-whistle tackle by Kiwi lock Brad Thorn – an incident that led to a free-for-all among the players and later earned
Thorn a one-match ban from a Sanzar judiciary panel.
Brits will join Bismarck du Plessis in providing cover for Smit, although the man who has now led the Springboks in more than 50 Tests is keen to get back onto the field to make amends for what happened at a rain-soaked Wellington. It was probably as poor as we could play in the Tri-Nations,” was Smit’s post-match verdict. “They defended well, kicked much better than us and we didn’t deserve to win.
“But there is a lot more left to give and I think what has disappointed us most is that we didn’t bring it all to the first Test.
“We can certainly only get better from that. We came to New Zealand to be very purposeful, and with the belief that we could change our fortunes here, and at least we have another crack at them.
“It would have been nice to have got a try and crept to within seven, and I thought we were good enough to get at least one point. We need to be a little bit more patient and composed with the ball, clean up the tackle area and try not to play too much in our own half.”
It as a first defeat for new South African coach de Villiers after two triumphs over the Six Nations champions Wales and a third over Italy on home soil.
He is banking on a positive reaction to a first defeat in a year from his players when they play in Dunedin.
“I believe there is too much talent in this team for them to just lie down,” said de Villiers.