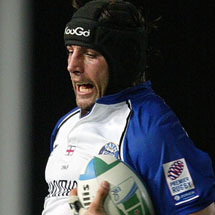 The veteran lock, capped 69 times by England, will now stay at the club until the end of the 2009-10 season.

The 35-year-old said: "Winning the European Challenge Cup was just reward for the players and the coaches at the club and also for the efforts I have put in during my time here."

Grewcock will compete with summer signings Stuart Hooper, Justin Harrison and England Under-20 international Scott Hobson for a place in the second row.