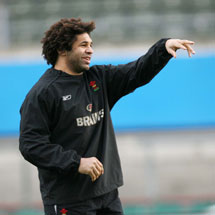 The 35-year-old Welsh international, who was capped 94 times by his country and appeared in the first and third Tests for the Lions against Australia seven years ago, had previously been with the Dragons on a playing contract.

The agreement will now see Charvis move into coaching, although he will be available to play if required.

"It’s very flattering that the management here have been so keen to hold on to me for another year," said Charvis.

"I hope that some hard work in the role that they have created will benefit the region… and it’s a good opportunity to continue enjoying my time with the region, following two very happy years.

"There are some very good young players here and it would be great to pass on my experience of the past 13 years to them."

Dragons head coach Paul Turner believes the move will benefit his region, particularly due to the vast experience Charvis has gathered during his time as a professional.

"Colin has spent the past two weeks with the region on a temporary basis and it’s clear that he has great ideas about the game and the future at the Dragons," said Dragons head coach Paul Turner.

"He has a huge knowledge of the game and a proven commitment to the Dragons region since joining us from Newcastle in 2006.

"Colin has already passed a great deal of experience on to the players around him and everyone at the Dragons is excited about his decision to stay with the club."