Scotland star Jim Hamilton insists he has been impressed by the work ethic at Edinburgh since moving to the capital from Leicester Tigers at the start of the summer. [more] 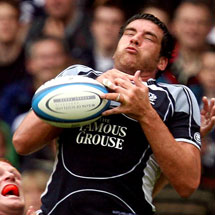 Scotland star Jim Hamilton insists he has been impressed by the work ethic at Edinburgh since moving to the capital from Leicester Tigers at the start of the summer.

The 25-year-old lock decided to walk away from one of European rugby’s most successful club sides to join a side which has only once managed to make it into the knockout stages of the Heineken Cup because he believed it would enhance his international career.

And from what he has seen so far, Hamilton is sure that he has made the right decision.

“It’s a hard-working club from top to bottom,” said Hamilton, who missed Scotland’s summer trip to Argentina because he needed surgery on his shoulder.

“I’ve been in training for a month with the young lads and you can see why the team was successful last year and will be even more successful next year.

“These young guys are putting so much effort in that they are going to push the senior players all the way.

“I have come from Leicester, which has been a big club for years and years, but it seems to me that anything Edinburgh is missing in terms of experience and playing numbers is more than compensated for in work ethic and passion.”

He continued: “I want to come up here and prove myself. I want to earn the right to play for Scotland.

“I know that a lot of people think that I’ve been parachuted into the team and I’ve not earned my stripes yet. I can understand that because people are passionate about who represents their country, and I want to show that I have earned the right to have that honour.’

“I’m pretty sure that Edinburgh as a club are going to help me to do that. This is a team which has the potential to go really well in Europe.

“Edinburgh maybe should have gone further in the Heineken Cup last season. They had that game against Toulouse which they should have won. So they are performing at that level and now it’s a case of getting results at that level. I think we’re ready to do that as a team.”