Australia prop Matt Dunning admits long-time rival and team-mate Al Baxter now has the inside running in the pair's ongoing battle for the job of starting tight-head prop. [more] 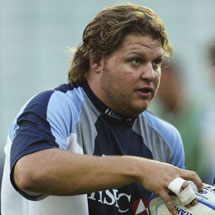 Australia prop Matt Dunning admits long-time rival and team-mate Al Baxter now has the inside running in the pair’s ongoing battle for the job of starting tight-head prop.

Dunning was given the nod over Baxter in the opening Test of the Robbie Deans era against Ireland last month before injury ruled him out of the two-match series against France.

The 29-year-old will begin his comeback for Eastwood in the Sydney club competition on Saturday but fears he has lost ground to his Waratahs team-mate, who he says gave a good account of himself against Les Bleus.

"Al played well enough I would think to retain his spot, so I’m hoping to get in there somehow on the bench maybe," Dunning said of his short-term selection prospects.

"It depends on what Robbie wants to do, (reserve prop) Ben Alexander didn’t play badly either so I’ll have to play well, get fit and do all that I can to get back in the side."

Dunning admits missing two Tests over what he thought was a simple graze on his leg suffered against Ireland, was a cruel blow.

"It was a pretty annoying thing, I had a ruptured fissure which is just like a hole in the shin which is no drama and I had a delayed bleed on that Tuesday after training and it just filled up," he explained.

"It turned from (being) like an empty swimming pool into sort of like a pitcher’s mound and just got infected really quickly.

"So they put me on an (intravenous drip) but it wouldn’t do it so they had to operate and just clean it up."

As one of nine current Wallabies returning to club rugby this weekend, Dunning endorsed Deans’ policy of releasing players and welcomed the chance to turn out for Eastwood for the first time in two seasons on Saturday.

"I need it because I played against Ireland, had a week off, missed two Tests so effectively I haven’t played in a month," Dunning said.

"I have to play, for my own sake, some footy before the next Test to get me in the (team for the opening match of the) Tri Nations."

As an added bonus, Dunning’s rare appearance in the Shute Shield will see him play alongside his younger brother Josh who is a regular member of the side.

"It’ll be good and the first time I’ll play with my little brother, I’ve never played any game of football with him ever," Dunning said.