Discipline the key for Henry

All Blacks coach Graham Henry has insisted discipline will play a key part in his side's attempt to record back-to-back victories over South Africa this Saturday. [more] 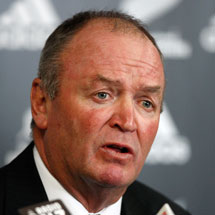 All Blacks coach Graham Henry has insisted discipline will play a key part in his side’s attempt to record back-to-back victories over South Africa this Saturday.

"Discipline is a very important part of international rugby," said Henry. "If you lose your discipline then you won’t play as well as you should and there will be consequences.

"So I think teams playing with discipline is critical and it’s something that we stress.

"Als,o we are role models for other young athletes as well so it’s very important that we play the game within the law and we play with discipline."

Both Henry and Springbok coach Peter de Villiers will meet referee Matt Goddard later today at a joint meeting prior to Saturday’s match at Carisbrook.