Paul Honiss, the world's most capped referee, will not be taking charge of any of the three Test matches on next year's Lions tour to South Africa after he announced his retirement from international refereeing with immediate effect. [more] 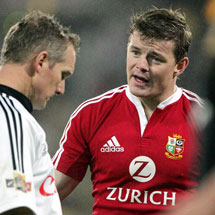 Paul Honiss, the world’s most capped referee, will not be taking charge of any of the three Test matches on next year’s Lions tour to South Africa after he announced his retirement from international refereeing with immediate effect.

As one of the world’s leading officials and as a non South African or British or Irish referee, Honiss would have been in contention to take charge of one of the matches in either Durban, Loftus Versfeld or Johannesburg in June or July of next year.

Instead, Honiss, who refereed the Lions against Bay of Plenty and Wellington in 2005, has called time on an action-packed international career that began in a Rugby World Cup qualifier between Tahiti and the Cook Islands 11 years ago.

In 2006 he became New Zealand’s most-capped Test referee, overhauling Paddy O’Brien’s total of 37 Tests before breaking Welshman Derek Bevan’s record of 44 internationals to become the world’s most-capped referee when he took charge of the Rugby World Cup 2007 bronze final between France and Argentina.

Honiss, whose last refereeing appointment came at the Suncorp Stadium in Brisbane on Saturday, July 5 for the First Test between Australia and France, was a key member of the IRB’s Elite Referee Panel headed by fellow Kiwi O’Brien.

“Paul is going to be a big loss to international rugby,” said O’Brien. “He is the current world record holder for the number of rugby internationals refereed. He has been involved in three Rugby World Cups and that experience cannot be replaced overnight.

“Paul epitomised professionalism He was the ultimate team player and from a personal point of view I will miss his leadership within the elite panel.”