Matfield ready for battle up front

Stand-in Springbok skipper Victor Matfield has made it clear that his side will be taking the threat posed by the Australian pack very seriously ahead of this Saturday's Tri Nations encounter in Perth. [more] 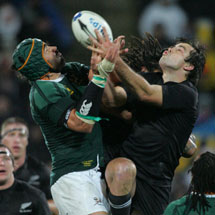 Stand-in Springbok skipper Victor Matfield has made it clear that his side will be taking the threat posed by the Australian pack very seriously ahead of this Saturday’s Tri Nations encounter in Perth.

The South African pack were in superb form during last weekend’s nail-biting victory over the All Blacks in Dunedin but Matfield is expecting another extremely tough encounter up front against the Wallabies.

"The Wallaby line-out is always a big threat and they will be very competitive in that department," said Matfield, who will lead his country for the second consecutive match in the absence of the injured John Smit.

"The public perceives the Australian scrum as weak, but it would be stupid for us to think that. We have been troubled by them in the past and we could get surprised by them again.

"It’s all about focus, as in defence. It depends on whether you really want to defend or scrum on that day. We have to make sure we’re 100 percent focused in the scrums and we go in with aggression.”

Following back-to-back games in New Zealand, South Africa are now preparing for their third away game in as many weeks. For Australia, on the other hand, Saturday’s fixture will be their fourth successive home match having had the comfort of playing their most-recent Tests against France (twice) and Ireland on their own soil, something which Matfield is clearly aware of.

"Their different tactical approach provides us with an interesting challenge and they have the advantage of playing at home in their first Tri-Nations match, while it will be our third consecutive away match.”