Honesty key for Gibbs in ’97 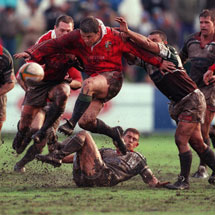 The 26-year-old Swansea strongman played a vital role in the series win over World Champions South Africa, but Gibbs credits the overall success of that tour to a strong team ethic rather than individual heroics.

"When that squad was announced in ’97, I think there was element that this squad was different, this management was different, and all those elements came together to create one playing entity," said Gibbs, who also represented the Lions in 1993 and 2001.

"We sat down and identified what we wanted out of each other and that was demonstrated through all the games in the Lions jersey."

The ’97 Lions were given little chance of success when they left Britain and Ireland to take on Carel du Plessis’ formidable Springboks, yet Ian McGeechan’s men returned home with a 2-1 series win and an impressive overall record that featured 11 victories in 13 games.

Gibbs set the platform for that success with a number of thumping tackles, as well as a barrelling run that knocked giant prop Os du Rant and the Springbok psyche flat on their backs, but he is quick to point out the equally- influential roles played by each and every member of the playing and coaching squad.

"There was never anyone who felt alienated in any way. That’s a true strength of a squad, that inward support from everybody. That was there in abundance in ’97 and that was why it was so successful on the field and off the field. We made a lot of friendships and there was never one clique.

"I’ve got my lists of Lions laws, and togetherness was on it. There was never any question of us against them. It was all 35 preparing to beat the Springboks. Everybody played their part in tat and that’s why everyone can share in the delight that we won the series because it wasn’t done by just the team on the day."

Anyone who has had the pleasure of watching the Living with the Lions documentary will have noticed the camaraderie and spirit within the ’97 squad. Despite the enormity of the task in hand, the Lions went about their business with an enthusiasm and sense of humour perhaps more associated with the amateur game than the professional era into which they had just entered. For Gibbs, an underlying honesty between everyone on tour bred that sense of enjoyment and, ultimately, led to an historic result.

"We had a lot of honesty and I think that was key. There are rules which you all need to adhere to. The fact that this was done in an open forum created a certain list of criteria, which included honesty, desire, ability and conscientiousness and all those kinds of words that pulled people together and created a strong bond in the team and the squad.

"One of the other criteria was that you had to enjoy yourself and have a laugh. It’s serious business most of the time but you had Austin Healey and John Bentley in the squad. They were great players and fantastic individuals and they were the ones who kept the morale of the squad high when you were away for such a long time."