New Zealand international Jono Gibbes has announced his retirement from all rugby after struggling to overcome a knee injury. [more] 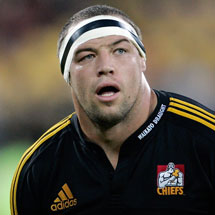 New Zealand international Jono Gibbes has announced his retirement from all rugby after struggling to overcome a knee injury.

The 31-year-old, who played 64 games for Waikato and 68 games for the Chiefs Super 14 franchise, including six consecutive seasons as captain, admitted it had been a difficult decision to reach but one he knew had to be made.

“I simply can’t play how I used to with my knee injury,” he said. “It is a hard thing to come to terms with because my heart is still in the game, but the simple truth is that my knee is no longer up to it.

“While I would have loved to have played more games in the red, yellow and black jersey this season, the reality is that I would have failed to meet my playing commitments and this would be a disservice to the team.”

Gibbes played eight Tests for New Zealand after making his debut against England in June 2004. His last match was against the British and Irish Lions in the second Test in Wellington in July 2005 which the All Blacks won 48-18.

The lock had led the New Zealand Maori team to a historic 19-13 victory against the Lions on his home ground, Waikato Stadium, earlier in that tour and was captain during the Maoris’ successful Churchill Cup campaign in 2006.

“Retiring from playing is a tough decision to make but now that I have come to terms with it, I’m ready to move into the next stage in my life, which I hope will still involve rugby,” he added.

Waikato Rugby Union chief executive Graham Bowen said: “Jono was an inspirational player in the red, yellow and black jersey and a crowd favourite with our supporters.

“He showed grit and determination to often overcome injury over the years and it is a great shame his knee injury has put an end to a successful rugby career.”