The nine Springboks released from international duty following the away leg of this year's Tri Nations are all set to play a part in this weekend's Currie Cup action. [more] 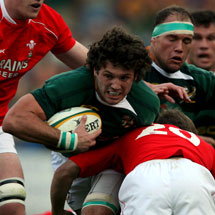 The nine Springboks released from international duty following the away leg of this year’s Tri Nations are all set to play a part in this weekend’s Currie Cup action.

Schalk Brits, Bolla Conradie and Brian Mujati all start for Western Province against Boland Cavaliers at Newlands on Saturday, with fly-half Peter Grant named as an either/or.

It’s a similar scenario at the Sharks, for whom  Ryan Kankowski, Odwa Ndungane and Ruan Pienaar all make the starting XV, while prop forward Tendai ‘Beast’ Mtawarira is also in the matchday 22.

The other player given permission by national coach Peter de Villiers to return to club duty is Adriaan Strauss, the hooker who appeared as a second-half replacement against Australia last Saturday. A week after becoming the 800th Springbok since 1891, Strauss will also jump straight back into domestic action after being chosen to wear the No2 shirt for the Cheetahs against the Valke.

The return of the Springbok contingent has been welcomed by the head coaches of both the Sharks and Western Province, the two sides set to benefit the most from their release.

“They are top quality players and you want to use that type of player,” said Western Province coach Allister Coetzee.

“They have experience and they are coming from a higher level of play.

“They bring speed, knowledge and skill to the team. But most important is for them to get the rest of the guys calm. The players should enjoy it again to go on the field and express themselves.”

Former Swansea and now Sharks supremo John Plumtree echoed those sentiments as his side attempt to bounce back from a humiliating defeat to the Cheetahs last time out.

“The Springboks (back) – plus a couple of injuries that have come right as well – was good to see,” said Plumtree this week. “Four good, class players adds to the depth and makes the job easier.”