Australia power past All Blacks

Australia stormed to a stunning triumph 34-19 over New Zealand in an exciting encounter in Sydney. [more] 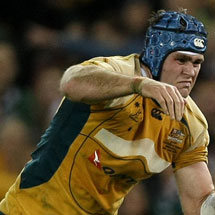 Australia stormed to a stunning triumph 34-19 over New Zealand in an exciting encounter in Sydney.

Having led at half-time, the Wallabies were forced to come from behind following an early strike from the All Blacks five minutes after the interval.

But as they have done throughout coach Robbie Deans’ five-Test stint at the helm, Australia found their way to the finish line with tries from forwards Rocky Elsom and James Horwill to extend their unbeaten run to five matches and claim top spot in the Tri Nations standings.

Fly-half Matt Giteau was superb throughout for the hosts, as was stand-in skipper George Smith and veteran Lote Tuqiri.

For the All Blacks, Dan Carter was at his sublime best while Mils Muliaina and Sitiveni Sivivatu looked dangerous, but it was not enough to avoid a second consecutive defeat.

The Wallabies mounted the first attacking raid of the contest when Luke Burgess scampered into space before desperate cover defence from Jerome Kaino saved the day.

Australia stayed on the attack but a careless high tackle from Brad Thorn prevented them from posting maximum points and landed him in the sin bin.

Giteau made no mistake with an ensuing penalty goal to hand the hosts a 3-0 lead.

An ill-advised clearing kick found Tuqiri in open space and the veteran flyer took full advantage, cutting the Kiwi’s defence to ribbons before he was finally brought to ground deep in All Blacks territory.

A brilliant pick-up and offload from Giteau found an unmarked Ryan Cross who strolled over under the post for a converted try and a 10-0 advantage after 12 minutes.

The All Blacks steadied and only desperate scrambling defence denied them on more than one occasion before Muliaina finally burrowed over in the 24th minute for the visitors’ opening try.

A half break from Giteau left New Zealand’s defence stretched – Adam Ashley-Cooper kicked into open space for a charging Tuqiri but it was fellow winger Peter Hynes who won the race for the ball for a 17-5 lead.

But the All Blacks would have the final say in a frenetic opening stanza when hooker Andrew Hore displayed impressive footwork to close within five points at the break.

The momentum stayed with the visitors after the resumption when scrum-half Andrew Ellis touched down in the 45th minute to level things up.

A brilliant dart from Carter left both Giteau and Berrick Barnes sprawled on the turf, the Kiwi pivot found a charging Ma’a Nonu who was grassed metres out before Ellis finished the job from the next phase.

Carter’s conversion gave the Kiwis their first advantage of the match at 19-17.

New Zealand continued to threaten but the Wallabies were next to strike against the run of play when the tireless Elsom set sail from 20 metres out to reclaim a slender lead, 24-19, with 25 minutes left.