One of England's most promising players has told of his desire to become a Lion in 2009. [more] 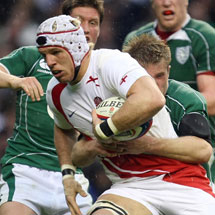 One of England’s most promising players has told of his desire to become a Lion in 2009.

Wasps flanker James Haskell was one of his country’s bright sparks last season and the 23-year-old would love the opportunity to show that same form in a Lions shirt in 10 months time.

"It would be a dream to be part of that trip to South Africa," Haskell, who currently has eight international caps to his name, told the Daily Mirror.

"There’s so much history, pride and esteem involved with the Lions that every single player wants to sample the experience.”

Having been part of the Wasps side that achieved Guinness Premiership glory under Lions coach Ian McGeechan last season, Haskell knows that his club form has to be the springboard to that ultimate goal.

"My first priority is to help Wasps continue to be a very successful club.

"We failed in Europe. Winning the Heineken Cup must be a massive target for us.

"Last season was huge because of the World Cup and everything else, but this campaign could be just as big.

"There have been a few changes at Wasps and then there are the new plans that Martin Johnson has for England. And, finally, there’s the possibility of going on a Lions tour.”