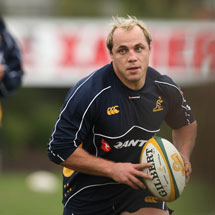 Skipper Mortlock missed last weekend’s encounter in Sydney after being concussed in the win over South Africa in Perth, while Waugh replaces Leinster-bound Rocky Elsom on the blindside flank.

Elsom has been struggling with a strained ligament in his foot and his fitness will be reassessed before the Wallabies leave for South Africa on August 15.

Australia currently top the Tri Nations standings with nine points ahead of their first away tie of the competition following wins over South Africa (16-9) and New Zealand (34-19) on July 19 and 26 respectively.

However, the All Blacks have won the last seven encounters between the two sides on New Zealand soil, with 2001 also the last time Australia have recorded back-to-back wins over their neighbours.

Graham Henry’s men will be defending a 22-year-unbeaten run against Australia at Eden Park in Auckland, a venue where the All Blacks completed a 3-0 whitewash of the Lions with a 38-19 victory in 2005.