Richie McCaw has given under-fire All Blacks boss Graham Henry a boost by being declared fit for this Saturday's vital Tri Nations clash against Australia at Eden Park. [more] 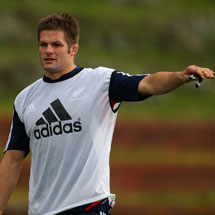 Richie McCaw has given under-fire All Blacks boss Graham Henry a boost by being declared fit for this Saturday’s vital Tri Nations clash against Australia at Eden Park.

McCaw has yet to appear in this year’s competition after an ankle injury ruled him out of the recent double header against the Springboks and last weekend’s 34-19 defeat to the Wallabies in Sydney.

McCaw returns to skipper the side from the openside flank, with outside centre Conrad Smith and full back Leon McDonald also winning recalls to the starting XV.

Smith replaces  Richard Kahui, who drops to the bench, while McDonald’s inclusion sees Mils Muliaina switch to the right wing instead of Anthony Tuitavake who fails to make the matchday 22.

Worryingly for Henry, a number of injury concerns still hang over the current Tri Nations champions. The former Wales head coach has been forced to name either/ors at hooker, scrum-half and for the final forwards’ spot among the replacements.

A hip injury threatens to rule out Andrew Hore, meaning Keven Mealamu could take over in the No2 shirt, while both Jimmy Cowan (knee) and Andy Ellis (ribs) could both be sidelined. If either scrum-halves fail to shake off their respective knocks, Henry will turn to Wellington Hurricanes scrum-half Piri Weepu who hasn’t appeared for his country in more than a year.

“We’ve made some tactical changes in our selections,” said  Henry, “but we also need to change how we play. Clearly there are areas we need to improve on from Sydney. We have to have the right game plan and execution.”